The underground infrastructure rooms and the access drifts of the Konrad repository are in service during the entire operating phase of the repository. The mine openings and access drifts inside the controlled area are supported by one- or double-shell anchor/shotcrete lining, which must be stable without the need for renovation/refurbishment and maintenance. To achieve this goal, BGE TECHNOLOGY GmbH carries out numerical analyses for dimensioning, which are followed by more detailed design work by a subcontractor of BGE for their implementation. These analyses comprise the Ramp 380, which connects the infrastructure rooms, the radiation protection room, and the E-truck service room. In this context, several huge numerical models are applied whose extensions represent several hundred metres underground. Each of them is discretised by up to 2.5 million zones. The models also take into account the excavation process in order to capture its influence on stability. The underlying constitutive model of the clay or carbonate-rich host rock layers includes anisotropic elasto-plasticity with strain softening. Faults are considered as well.

The time sequence modelled comprises the construction state, the dimensioning of the temporary support system, and the determination of the rock pressure- induced loading of the concrete lining during the operating phase of the repository.

The simulation of the drift excavation or drift widening to diameters of up to 8 m – 9 m demonstrates an adequate level of stability. Due to heterogeneous and anisotropic rock properties, typical heterogeneous displacements occur. As securing means until the concrete lining is finished, fully bonded anchors with lengths between 4 m to 6 m in drifts and up to 8 m in junctions are used.

Due to differential rock movements, the loading of the concrete lining varies as well locally. Local load maxima occur in particular when cross-sections change and in curves. In these cases, an iterative process between planning and numerical calculations has made it possible to minimise the internal forces considerably by specifically taking expansion joints into account. Consequently, the efficiency of dimensioning and the construction process were improved. 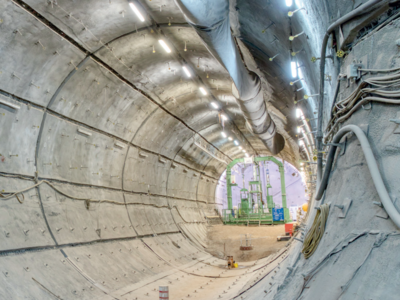 Displacement of the concrete lining due to rock pressure in [mm]